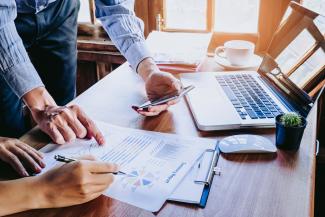 The first tax season after tax reform was a bumpy ride for clients.

It seems that when it comes to what clients feel about their taxes after the Tax Cuts and Jobs Act of 2017, we might be dealing with a classic case of loss aversion.

Even though many clients realized slightly higher paychecks because less was withheld, many felt the sting of the loss of the big refund check more than the joy of the small monthly bump in their paycheck.

“Long story short, a lot of people were getting their tax cuts in the form of higher take-home pay,” explained Sharif Muhammad, CPA/PFS, MST, CFP®, a partner at J&M Associates in New York City. But people were under-withholding from their paycheck.

“What you had was a lot of people who normally get a refund having a significantly lower refund, some people who were breaking even or getting a modest refund owing,” Muhammad said. “That was a huge surprise for a lot of clients.”

After the TCJA was signed into law in December 2017, planners got to work communicating the changes to clients and trying to prepare them for what was to come.

Debbie J. Freeman, CFP®, CPA, of Peak Financial Advisors LLC, in Denver, Colo., noted her firm had one-on-one meetings, sent out newsletters, and ran projections so clients knew what to expect, which all seemed to pay off.

“I didn’t have any train wrecks this tax season,” she noted.

Most of the planners interviewed by the Journal did extensive outreach, but like with any change, clients didn’t know what to expect and that made them nervous, said Dave Stolz, CPA/PFS, CFP®, chair of the American Institute of CPAs PFS Credential Committee.

“Because everything was so new, there was an unspoken anxiety about what was going to happen,” Stolz said.

The result of the first tax season after tax reform? A mixed bag. Planners from across the country shared how clients felt about the effects of tax reform and some lessons they learned to implement in the upcoming tax season.

Those clients “were actually saving money on taxes, decreasing their tax burden, and saving for retirement by putting a big chunk in a defined benefit plan, a profit-sharing 401(k), or a combination of those,” Alves said.

Overall, Freeman’s clients felt positive about tax reform, especially because of the disappearance of the alternative minimum tax.

Some clients didn’t feel positive about taxes after tax reform because they were confused or were suffering from sticker shock at the price of their taxes, even if on the whole they saved a bit more over tax year 2017.

“Many of my clients were surprised to find that they owed money with their tax returns,” Laurette M. Dearden, CPA, CFP®, RICP®, said. “Many of them owed a lot of money.”

Her biggest client complaints were that they didn’t understand where anything was on the forms.

“Loss” of refunds or having to pay. Some clients may have been expecting to save money on their taxes or to see a huge refund after tax reform, according to Alves. “Everyone expected to save on taxes, or pay less, or receive a larger refund,” he said. They didn’t, and “that’s what surprised most individuals.”

Brandt Kuhn, CFP®, partner and managing director of Beacon Pointe Advisors in Newport Beach, Calif., said a physician client of his made $100,000 more than he had the previous tax year, yet had such high expectations for the advantages of tax reform that he expected a lower tax bill than the year before. In reality, he had the exact tax bill as the year prior.

“He was so upset,” Kuhn said. He had to explain to his client that he didn’t withhold enough throughout the year and that he actually paid less in taxes because he made a $100,000 more than the previous year and paid the same amount. “I told him, ‘Tax reform worked for you.’”

Not benefitting from itemizing. According to the Tax Foundation, approximately 10 percent of taxpayers itemized for tax year 2018, versus 30 percent who itemized in tax year 2017.

Clients were not pleased that they were not able to itemize because the standard deduction was higher.

“There were some people who are always used to itemizing their deductions who were surprised they no longer met that threshold because the standard deduction almost doubled,” said Luis Rosa, CFP®, EA, of Build a Better Financial Future based in Las Vegas, Nev.

SALT cap. Another shocker for clients—especially those in high-tax states—was that state and local tax (SALT) deductions were capped at $10,000.

For example, many of Rosa’s clients in New York had previously been deducting $30,000 to $40,000 in state and local taxes. Sallie Mullins Thompson, a CPA and financial planner in New York, agreed that the SALT cap caused some angst.

“Some of my clients were surprised by how much they were penalized by the SALT cap and the removal of the ability to deduct Schedule A miscellaneous expenses, mainly for unreimbursed employee expenses and investment management fees,” she said.

Loss of deductions. Other planners agreed that the missing deductions were another client complaint. Stitzel noted he had a salesman client who had tens of thousands of dollars in unreimbursed employee expenses.

“He was not aware of the loss of deductibility due to the tax overhaul,” Stitzel explained. “We advised his company to implement an accountable reimbursement plan, but that was still a big shock for him to get over.”

The good news is CPAs and CFP® professionals foresee tax season 2020 as being a little less stressful. Learning from last year, planners offered up some things they will implement in the 2020 tax season.

Be proactive and take a multiyear approach. You have two months left in 2019 to help clients plan for next tax season.

“The time to act is now—in the last part of the year—because this is where we can actually make the largest changes,” said Kuhn.

Yet it isn’t about just planning for the year ahead; rather, take a multiyear approach.

“Tax planning is always multiyear,” Stolz said. Focusing just on the year at hand is akin to squeezing a balloon in the middle—you’ll have to deal with more the following year. But doing multiyear projections and seeing what a client’s taxes will look like one, two, or three years from now will help prepare them.

“This is a fascinating time to do multiple-year projections,” Stolz said.

One example is to consider bunching charitable contributions into a donor advised fund so clients can itemize the year they fund the DAF and perhaps take the standard deduction the following year, Stolz suggested.

Another example, according to Rosa, is setting up a 529 to take advantage of the tax benefits since the deduction for tuition and fees is now gone.

Double-check withholdings. Ensure clients check their withholdings to see if they’re reasonable and on pace to meet their tax needs, Muhammad offered. (He recommends clients use the IRS withholding estimators at IRS.gov.)

Like many planners, both Rosa and Dearden had clients who were under-withholding; they either owed more tax than they expected or they didn’t get the refund they expected.

“People need to realize that if they owed last year, they will owe again this year if they haven’t changed their withholding,” Dearden said. “I’ve been meeting with clients and having them change their withholding at work, or pay estimated taxes so that they don’t owe at the end of this year.”

Be well-versed in tax laws. Perhaps you feel the tax laws aren’t in your wheelhouse because you’re not an accountant or tax adviser, but Muhammad said just being familiar with the laws will add value to your clients.

“Nothing could differentiate a CFP® [professional] more than being well-versed in taxes, especially during a massive tax change like the one we just experienced,” he said. “Especially when you’re dealing with small- to medium-sized businesses, as well as families who could be significantly impacted by the tax law.”

The first step is to ask your client for an introduction—perhaps even tag along (with an invitation), to a meeting with their CPA or tax adviser, Stolz suggested.

Alves promotes working with CPAs and tax advisers as an added benefit to clients. “Once they realize how involved we our with our [mutual] client’s finances and taxes, we become partners,” he said.

Communicate in ways that are digestible. Stitzel’s firm did their due diligence and sent out frequent communications to clients regarding tax reform, but they didn’t really use it.

“We were a little caught off guard that more of our clients either neglected to read our tax reform communications or found it exhausting to finish,” Stitzel said. “Tax reform is not the most enthralling topic, and we could have done a better job breaking it down to the fundamental quick-reads.”

This year, he said, they’ll change their communication to be easier for clients to digest, making better use of bullet points and plain language.

“Clients now know what to expect,” Stolz said. “They understand what opportunities they’ve got.”

“I do think [clients] have a better understanding of how it impacted them directly,” she said. “We, as preparers, have more clarity from the IRS, and I do see it as being more of a smooth tax season this year.”

Ana Trujillo Limón is senior editor of the Journal. Contact her at HERE.​