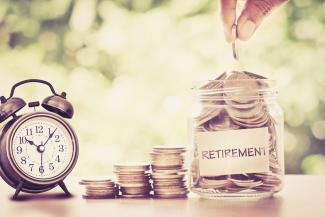 Anyone retiring in 2019 could understandably be feeling a little skittish.

There’s retirement research showing market declines in the first few years can devastate a portfolio’s chances of providing enough income for life, and recent volatility after a nearly decade-long bull market is worrisome.

Interest rates moving higher could be a good sign, in theory, for someone hoping to build ladders of CDs, for example. On the other hand, if it also ushers in an era of rising inflation, that’s troubling, too. And a prolonged government shutdown could have even more of an impact on the economy.

But if delaying is no longer an option, either because of health, the job market or simply your own conviction, consider building in a few contingency plans.

Several financial advisers contacted for this article said they are carving out cash buckets for retirees’ living expenses. Some of them take spending money directly from the cash bucket, replenishing it with stock gains periodically, while others keep the cash as a reserve to draw from during market downturns.

Either way, they say the cash acts as a volatility buffer, allowing clients to refrain from panic selling into a market decline.

“Creating a bucket strategy can help clients compartmentalize assets designed for certain purposes or periods of time,” said Ashley Folkes, a financial planner in Scottsdale, Ariz. “Having safe money to draw down from for the first few years alleviates some of the stress from the buckets [that are invested in stocks],” she said.

Consider a couple retiring this year at precisely their full retirement ages, as defined by the Social Security Administration. The 66-year-olds will get a combined $3,000 a month in Social Security benefits and they have retirement accounts worth $500,000.

Suppose the couple wants to withdraw $21,853 this year from savings, which is the spending rate recommended by BlackRock’s LifePath Spending Tool. Using a bucket strategy, the couple would put $65,559 into the cash bucket while investing the remaining $434,441 in a portfolio of 60 percent stocks and 40 percent bonds.

Clearly, the cash bucket creates a more conservative portfolio overall, which is important for retirees to understand as they try to find the appropriate amount of risk to cover their expenses and inflation.

Now, for the cost side of the equation.

Anyone about to retire should know precisely how much they are spending, though advisers said this is sometimes a big area for miscalculations.

Particularly in the first few years, travel and hobby expenses can really add up, notes Mike Alves, a financial planner in Pasadena, Calif.

In coming weeks, this column will explore other items on 2019 retirees’ to-do list, including Social Security and tax strategies, the hiring outlook for those second careers in retirement and replacing a lost sense of purpose, which can result in costly problems down the road.

If you plan to retire this year, send us an email with your biggest questions or concerns and we may answer them in an upcoming column.

Janet Kidd Stewart writes The Journey for Tribune Content Agency. Share your journey to or through retirement or pose a question at journey@janetkiddstewart.com.